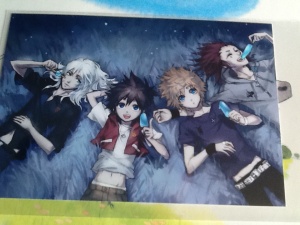 E3 has come and went and gamers are left with a lot to reflect on.  I won’t go on about the xbox1 as I don’t intend at this point to get any of the three new systems.  I do plan to get a 3DS by the end of the year, but that’ll be the last new handheld/system I get for a while.

Not to say I won’t be playing the games on the newer systems thanks to fellow gamer friends, but below are the titles that piqued my interest the most thus far.

Games That Caught My Eye

Hometown Story– it looks cute and fun.  I’m also very interested in the fact Nobou Utemastsu is doing the music.   Is part of the Harvest Moon franchise so it’ll be a nice twist.  I do have to ask why the debut trailer was dumbed down though.
.
Lego Marvel super heroes– Being a marvel fangirl I was interested in this title.  I’ve only played Lego Star Wars but I loved it.
.
Super Mario World 3D If I had a wii U I’d probably get this one.
.
Pokemon X & Y I’m becoming increasingly interested in the next installment.  The pokemon so far are cuter than last generation and there’s a new type??!  Fairy?  It seems like there are a lot of changes in the newer game, though it woud be nice if the battle mechanics got an overhaul
.
Mario Dream World– it looks good so ill be following it
.
The Legend of Zelda: Oracle of Seasons and Ages–  I missed out on these when they first came out, but wanted to give them a shot.  A revamp means ill not be missing them this go around.
.
Donkey Kong Returns 3D–  I love Donkey Kong so this is a title ill have my eyes on.
.
Super Smash Brothers –  Megman enters the arena!  Ill definitely be getting the 3Ds title.
.
Angry Video Game Nerd Adventures–  This announcement surprised me, but being a huge fan of James Rolfe, I’ll most likely give it a shot!
.
Yoshi’s New Island – I’ve loved the previous games, so this one is getting added to my interested in list!
.
Sonic the Lost Worlds– I’m curious to see how it turns out
.
Disney infinity –  I love Disney so I’m a sucker for good (or at least good looking Disney games)
.
Kingdom Hearts 3- It’s finally been announced after 5 prequels/side stories and seven years after the sequel.  Sigh, I sense buying this game, finding a friend with a PS4 just to play Kingdom Hearts 3.
.
….plus too many RPGs to name

One speculation that surprised me was an official hinting that this might be the last console generation.  I really hope it doesn’t come to that, but maybe technology and consumer demands are leading into that direction.  I’m still old school when it gnomes to games and I’m not really a fan of online play, at least not in the extreme gaming companies are making it.  Sill, gaming is changing in both exciting and uncertain ways.