After ten years of owning Animal Crossing and 1 1/2 months of adamantly paying off 100,000 every week, I’ve finally paid off my final debt to Tom Nook! 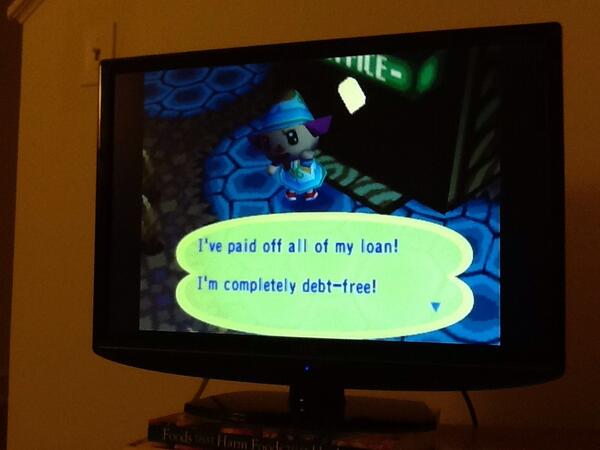 For those who haven’t played Animal Crossing-you are able to expand your house a few times.  Each modification is nicer and costs more.  The last one was 798,000 bells and when I first acquired it a couple years ago, I would pick it up and earn a couple thousand before giving up and switching to a new game.  This go around, I was determined to see it gone and got a statue erected in my honor for it too.  Not going to lie, it was bitter-sweet because you get attached to the characters in your hometown.  I pay pop it in a few years ago from now, but as for actually playing it, its beaten, backloggery updated.

Too bad my actual student loans can’t be paid off selling fossils, seashells and fruit.

With Animal Crossing beaten, I’ve turned to my next game; Final Fantasy III.  It was the first game I got for my DS years ago and I ended up getting stuck early in the game, put it down and never went back.  Since its been so long I started a new game file and I’m at Dragons Peak currently.

What are you looking forward to this month?  Minus Thanksgiving?