Three years ago I returned home from camp after a crazy (but good) summer.  After seeing family and making plans with friends for the near future, I returned to my room in my parents house and did something I’d wanted to do all summer, play video games.  I went with playing my Super Nintendo and popped decided to play Bubsy. 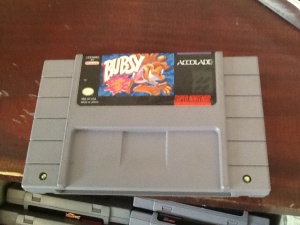 I’ve gotten to the last three stages before, so I entered the codes and preceeded to play.  It took a few runs, but I got to the last level.  I quickly died aganist the final boss.  Several more tries an hour later and I turned off my SNES, fustrated that I was so close to beating the second oldest game I have and haven’t beaten, yet failed.  Part of me sincerely wonders if I ever will.

Truth be told, there are a few games in my collection I’m not sure I’ll ever beat.  According to my backloggery I have 73 uncompleted games.  More than 10 are games I’ve made progress on, but I just haven’t been able to finish for one reason or another.  Some games I wonder if they aren’t too hard because better games than myself have a lot of trouble with them.  Honestly though, Ninja Gaiden for the NES is tough!

Battletoads (NES)-I actually haven’t played battletoads yet and based on what others have said, I’m in for a challenge.
.

Bubsy-I really like this game despite all the bad rap it seems to get.  It is unforgiving and I haven’t been able to pick it up in three years after my last bad run in.
.

The Jungle Book-It’s a lot of fun, but trying to beat Kaa is not fun.  I can barely even get any hits in before dying and a lot of the play runs I see make it look easy.
.

Ninja Gaiden-I have little trouble getting to the final boss.  It’s beating him thats the problem.
.

Super Ghouls and Ghost-I’ve only played it a little bit, but from what I’ve seen and heard this will be a challenging one to beat.
.

Warios Woods-I’ve spent probably 20 hours trying to get from level 70 to 75.  Since its a higher level, once you make a small mistake, you’re at risk.  A few more and it’ll be game over

On a gaming note, I’ve been making good progress on Final Fantasy Tactics: War of the Lion.  I had to restart it because I boxed myself into a corner where I wasn’t strong enough to beat a boss, but couldn’t level up either because I saved where I couldn’t.  My second playthrough is going much better and I hope to beat chapter 2 today and play Pokemon White 2.

Are there games in your backlog that you don’t know if you’ll ever beat them?